By the 1860s, it was necessary once more to replace the parish church and the Catholic Directory (1864) carried an account of the dedication of the new chapel which recalled the extent to which the Catholic church had advanced since the penal era: ‘The ceremony of solemnly opening the beautiful rural church of St. Brendan, Coolock, County Dublin, after the completion of the enlargements and decorations which have recently been executed through the zeal and charity of the esteemed administrator, Rev. Michael Brady and the faithful people of the district. Within the memory of many, the place at which the rites of the Church at Coolock had to be celebrated was a mud cabin, scarcely competent to afford shelter from the weather. The present church, built in the form of a cross, is a neat and commodious edifice exteriorly and its interior is finished in a style of taste and elegance which reflect the greatest credit to the good priest and his flock’. 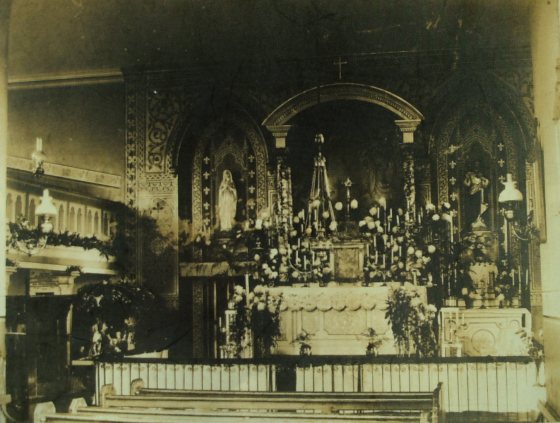 The Altar of The Old Church at Christmas

This church remained in use for over a century, but during that time is was modified on several occasions. In 1916 a bell tower was added at a cost of £114. Three times each day the bell was rung manually to announce the Angelus, until the tower was removed in the 1970s. By that time the old church had fallen into disrepair, but it was also unsuited to the liturgical reforms of the Second Vatican Council. For that reason, the Parish Priest Father Mansfield launched an ambitious campaign to replace it. Through their generosity and energetic fundraising, the people of Coolock raised £80,000.The fundraising campaign included planned giving, cake sales, bingo and many more events. Many individuals and groups donated seats, shrines and vestments in order to build and fit out the present church, which was dedicated to St Brendan by Archbishop Dermot Ryan in July 1974. Yet conscious of the tradition of worship on the site, efforts were made to save as much of the old church as possible and it has subsequently been cleverly converted into a parish centre of which the community can be exceptionally proud. 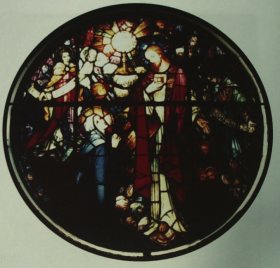 One of the tabernacles in St. Brendans Church, the one below, depicting the Agnus Dei, was donated by Mrs. Taylor

This effort to preserve the past also accounts for the curious presence in the church of not one but three tabernacles. The continuity is also reflected in the beautiful stained glass window which is now in the baptistery, built in the 1990s, but which originally graced the old chapel. Depicting the apparition of the Sacred Heart to St. Margaret Mary Alacoque (1647-90), the window is the work of the Earley family, the renowned stained glass artists of Camden Street. A gift of Mr Gilbey, the wine merchant, the window has a significant local connection, in that the model for St. Margaret Mary Alacoque was a local girl, Alacoque Taylor of Beechpark who had been called after the saint.

The 1990s brought further changes to the parish. In 1990, Canon Patrick O’Farrell went to his reward. Much loved by the people of Coolock, Fr O’Farrell was famous not only for his enthralling sermons, which were continued from Sunday to Sunday and usually contained entertaining updated accounts of biblical stories. Perhaps even more famous was the holy man’s faithful dog, Skippy who was the best loved dog in the world. When Canon O’Farrell went on school visits , Skippy was given the teacher’s chair, where he sat patiently listening to the story telling. Then as soon as he heard the words “and they all lived happily ever after” Skippy headed for the door in the sure knowledge that his time in the classroom was over. Fr O’Farrell’s passing marked the end of an era and within a few years the Archbishop entrusted the parish to the care of the Marists. 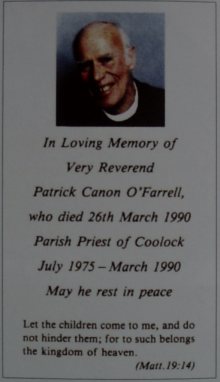 Present Clergy in the parish 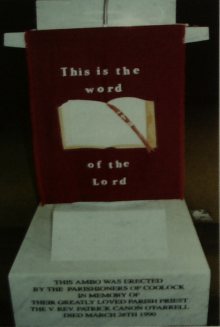 A parish however is not just about buildings and the vitality of the community can be seen in the great variety of groups within the parish. The spirit is also reflected in the three ordinations in the parish, the first of which was Fr. Terry Hayden ordained by Auxiliary Bishop James Kavenagh on 14th December 1977, for the archdiocese of New Orleans. Following this was Fr. Alan Hilliard (1998) and Fr. Tom Dalzell in (1990).

Priests who have served in St. Brendan's since the opening of the new church in 1974