Born in Dublin in 1778 into a mixed Catholic and Protestant family, Catherine moved to Coolock in 1802 following the death of her mother. She lived at Coolock House, the home of William and Catherine Callaghan, as the companion of Mrs Callaghan. From the gate lodge of Coolock House, Catherine began to feed the poor of the district; it was here too, that she began what was to be her life long vocation, Catholic education. In time, she inherited the O’Callaghan estate which included £25,000, Coolock House and its contents. This enabled her to expand her good work and in 1824, she leased large premises in Baggot Street which she established as a school for the education of poor girls and a home for poor girls and women. This was the beginning of the Mercy Order, which eventually became the largest congregation in the English- speaking world. In time they established schools, orphanages and hospitals across the world, but her spirit lives on in both Scoil Chaithríona (opened 1960) and Mercy College (founded 1963) which educates the girls of the greater Coolock area. Coolock House also houses the Mercy Centre which offers a variety of courses in spirituality. 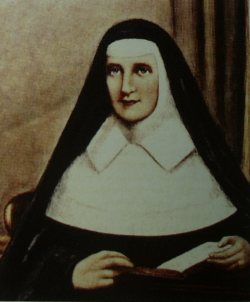 Sr Catherine McAuley founder of the Sisters of Mercy order, circa 1824

The education of boys has a longer tradition in the parish. The earliest reference to education in the parish comes from 1620 when Patrick Drake, (brother of the parish priest) conducted a school in the area. In 1821, the Catholic Directory, listed a ‘charity free school in Coolock catering for 100 children’ and the 1826 the parliamentary Report of the Commission of Enquiry into Irish education referred to a parish school at Coolock, where Mr Brennan instructed thirty children. These ‘hedge schools’ provided an adequate education, but they were fee paying and as such excluded the majority of the population. Before the National School System was established in 1831, poor parents had no educational opportunities for their children except for the Protestant free schools.